How Do You Save a Civilization from Self-destruction?

Islands in the storm: It was the monk’s commitment to reading, writing, and education which ensured the survival of Western civilization after the fall of the Roman Empire and the invasions of the Barbarians.

Small islands rose from the seas atop extinct volcanoes and now sit, strong and elevated above the waves, impervious to the battering of a storm-tossed sea. These islands are isolated, naturally removed from the fray, and maintain their own ecosystem even as the oceans and mainland churn and convulse. It was in such a convulsive and tempest-tossed Europe that the monasteries rose to become island of peace, Christianity, and culture.

It was the monk’s commitment to reading, writing, and education which ensured the survival of Western civilization after the fall of the Roman Empire and the invasions of the Barbarians. They laid the foundations for European universities and became the bridge between antiquity and modernity. 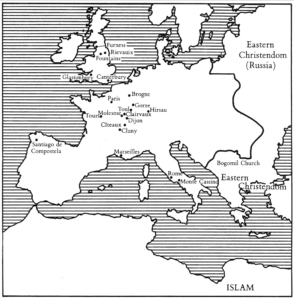 In that quiet valley St. Bernard and his growing fellowship labored in silence and content, free from the “storm of the world,” clearing the forest, planting and reaping, making their own furniture, and coming together at the canonical hours to sing, without an organ, the psalms and hymns of the day. “The more attentively I watch them,” said William of St. Thierry, “the more I believe that they are perfect followers of Christ … a little less than angels, but much more than men.” The news of this Christian peace and self-containment spread, and before Bernard’s death there were 700 monks at Clairvaux. They must have been happy there, for nearly all who were sent from that communistic enclave to serve as abbots, bishops, and councilors longed to return; and Bernard himself, offered the highest dignities in the Church, and going to many lands at her bidding, always yearned to get back to his cell at Clairvaux, “that my eyes may be closed by the hands of my children, and that my body may be laid at Clairvaux side by side with the bodies; of the poor.”

The concept of withdrawal from society is essential to the Christian tradition of monasticism, a term that derives from the Greek word monachos , which means a solitary person. Monks and nuns performed many practical services in the Middle Ages, for they housed travelers, nursed the sick, and assisted the poor; abbots and abbesses dispensed advice to secular rulers. But monasticism also offered society a spiritual outlet and ideal with important consequences for medieval culture as a whole. Monasteries encouraged literacy, promoted learning, and preserved the classics of ancient literature, including the works of Cicero, Virgil, Ovid, and Aristotle.

It was the century when ancient Greek and Latin manuscripts preserved in monasteries were discovered and read and discussed once again thus paving the way for the Renaissance, the rebirth of antiquity which, in synthesis with christianity, produces a unique new civilization.

So, the dubious distinction of Dark Ages, properly speaking, belongs to the sixth and seventh centuries (500 to 700 AD) which indeed were centuries of meager fruits in education, literary output and other cultural indicators. Those were the centuries of cultural retrogression, the centuries of the Barbarian invasions in Italy and elsewhere which effectively wrecked Roman civilization as we know it. Those invasions destroyed cities, monasteries, libraries, schools, institutions such as law, government, you name. It was in fact the Church that stepped in the vacuum and maintained a modicum of order within a crumbling civilization. As Christopher Dawson aptly writes: “The Church had to undertake the task of introducing the law of the Gospel and the ethics of the Sermon on the Mount among peoples who regarded homicide as the most honorable occupation and vengeance as synonymous with justice.”

How was this accomplished? By the establishment of Western monasticism by St. Benedict of Nursia at Montecassino Italy (some fifty miles south of Rome) in 529 AD. St. Benedict’s immediate intention was not to do great deeds for European civilization but that was the result. At its height the Benedictine order boasted 37,000 monasteries throughout Europe.

Besides praying and working out their salvation and preaching the gospel, what else did monks pursue in those monasteries? The practical arts and agriculture were two of their most significant enterprises. They literally saved agriculture in Europe.

But there was one occupation of the monks which, perhaps more than any other, helped in the preservation of Western Civilization: that of the copying of ancient manuscripts. It begins in the sixth century when a retired Roman senator by the name of Cassiodorus established a monastery at Vivarium in southern Italy and endowed it with a fine library wherein the copying of manuscripts took center stage. Thereafter most monasteries were endowed with so called scriptoria as part of their libraries: those were rooms where ancient literature was transcribed by monks as part of their manual labor.

The other place where the survival of manuscripts had priority were the schools associated with the medieval cathedrals. It was those schools of medieval times which lay the groundwork for the first University established at Bologna Italy in the eleventh century. The Church had already made some outstanding original contributions in the field of philosophy and theology (the various Church fathers among whom Plautinus, St. Augustine, St. Anselm, St. Thomas Aquinas, Don Scotus) but she was also saving books and documents which resulted indispensable later on for the preserving of Western civilization.

The best known of those scholars of the Dark Ages was Alcuin, a polyglot theologian who worked closely with Charlemagne to restore study and scholarship in the whole of West-Central Europe. In describing the holdings of his library at York he mentions works by Aristotle, Cicero, Lucan, Pliny, Statius, Trogus Pompeius, Virgil. In his correspondence he mentions Horace, Ovid, Terence. And he was not alone. The abbot of Ferrieres (c. 805-862) Lupus quotes Cicero, Horace, Martial, Seutonius, and Virgil. The abbot of Fleury (c. 950-1104) demonstrated familiarity with Horace, Sallust, Terence, Virgil.

The greatest of abbots after Benedict, Desiderius, who eventually became Pope Victor III in 1086, personally oversaw the transcription of Horace and Seneca, Cicero’s De Natura Deorum and Ovid’s Fasti. His friend Archbishop Alfano (also a former monk at Montecassino) was familiar with the works of ancient writers quoting from Apuleius, Aristotle, Cicero, Plato, Varro, Virgil. He himself wrote poetry imitating Ovid and Horace. Saint Anselm, as abbot of Bec, commended Virgil and other classical writers to his students.

The other great scholar of the so-called Dark Ages was Gerbert of Aurillac who later became Pope Sylvester II. He taught logic but also ancient literature: Horace, Juvenal, Lucan, Persius, Terence, Statius, Virgil. Then there is St. Hildebert who practically knew Horace by heart. Thus, it is a great fallacy to assert that the Church encouraged the destruction of ancient pagan culture. To the contrary she helped preserve that culture which would have otherwise been lost.

There were monasteries, moreover, which specialized in other fields of knowledge besides literature. There were lectures in medicine by the monks of St. Benignus at Dijon, in painting and engraving at Saint Gall, in Greek, Hebrew, Arabic in certain German monasteries. Some monks after learning all they could in their own monastery would then travel to other monastic schools established during the Carolingian Renaissance. For instance, Abbot Fleury went on to study philosophy and astronomy at Paris and Rheims.

Montecassino, the mother monastery, underwent a revival in the eleventh century which scholars now consider “the most dramatic single event in the history of Latin scholarship in the 11th century” (see Scribes and Scholars by L. D. Reynolds and N.G. Wilson, 1991). Because of this revival manuscripts which would have been forever lost were preserved: The Annals and Histories of Tacitus, The Golden Ass of Apuleius, The Dialogues of Seneca, Varro’s De Lingua Latina, Frontius De Aquis and thirty odd lines of Juvenal’s satire that are not found in any other manuscript in the world.